Here is an introduction to classical performing arts that have continued to retain their Japanese identity.
All are designated as UNESCO Intangible Cultural Heritage. 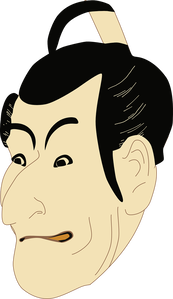 Kabuki originally started in 1603 on a makeshift stage in a dry river bed when Izumo no Okuni a Shinto priestess formed a female troupe and performed a Buddhist dance in Kyoto. Since then and for the last 400 years Kabuki has been a unique theatrical art of songs called gidayu, ballad drama, and dances only performed by male actors.  Even if there is a female role in the story, a male actor performs the role, and the music is always live!

Today’s style of Kabuki was shaped during the Edo period in the 1600s. The charm of Kabuki is the unique movement. The make-up and costume suit the role. They are unique for each role.

There are 3 types of Kabuki plays: the stories depicting samurai battles are called jidaimono; the stories depicting commoners and peasants and showing love suicide among them are called sewamono; and the stories featuring mainly dance and little to no dialogue are called sosagoto.
​
The staging, the music, the costumes, the actors themselves are all very dramatic and powerful! It can sometimes be an overwhelming experience for the audience!
​
＊Why don't we go to Kabuki Theater in kimono?
The manners and etiquette about Kimono are explained separately. Please refer to 'Japanese clothing 'Kimono' / The Japanese living environment' page. 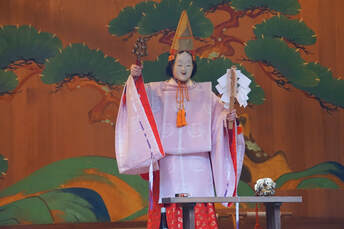 The origin of Noh is from ‘Dengaku’ and ‘Sarugaku’ in the 9th century (the Heian era in Japanese history). ‘Dengaku’ is a style of dancing and music originally performed at agricultural festivals. ‘Sarugaku’ is a comic dialogue performing a sort of funny mimicry and a dialogue with artistic skills.

In the mid-14th century (the Muromachi era in Japanese history), a Noh play was established by Kanami and his son, Zeami and they perfected the aesthetic stage art of Noh.
Noh features tragic stories. It presents a delicate, subtle/hidden, beautiful world because most of the main characters are ghosts. The characters' movements are simple, sophisticated and refined, and are the opposite of Western arts like ballet, where the movements are open.
The subtle and profound beauty of Noh is highly appreciated not only in Japan but also overseas! 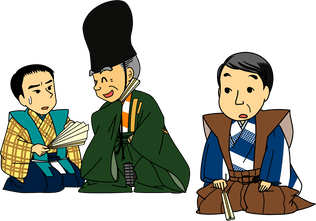 KYOGEN
Kyogen Designated UNESCO Intangible Cultural Heritage in 2008
​
Like Noh, Kyogen is a traditional performance that is also evolved from ‘sarugaku’. ‘Sarugaku’ is a comic dialogue performing a sort of funny mimicry and a dialogue with artistic skills. ​​​Kyogen dramas have few characters and simple compositions. It is a comedy and it emphasizes the comical aspect of sarugaku.
It is usually perfomed along with Noh or played between Noh programs. Kyogen was shaped as a theatrical art during the late Muromachi period (in the 16th century).

Noh features tragic stories to express a subtle feeling and a world of delicate beauty, while kyogen represents a comical world without using unique masks called ‘omote’, except for a few roles. Also, spoken dialogues are at the heart of Kyogen performances, combined with utai (chanting) and dancing.

The characters of kyogen are ordinary people usually named ‘Taro-kaja’ and ‘Jiro-kaja’ who are friendly people. The themes are social satires or tales of a person's failure in their daily life. For example, the story is about bad guys, but finally, people understand that they are fundamentally good people.
Kyogen is intended to make people laugh, so it is called the art of laughter!

The storyteller, called ‘tayu’, describes the scene and the lines of characters all by himself.  A Shamisen is a traditional Japanese string instrument, a little like a guitar. The musicians play a melody on the Shamisen that expresses the scenes and the characters’ feelings.
Three puppeteers manipulate 1 to 1.5 meter high puppets accompanied by the melody, making the puppets appear to have their own will. In one scene, the faces of the puppets instantly change from the smile of a cute girl to the furious frown of the demon.
Chikamatsu Monzaemon, a librettist, produced masterpieces and attracted wide popularity in 18th century. Then Uemura Bunrakuken established the present style of bunraku. The history of Bunraku is older than that of Kabuki.

It is amazing that Bunraku includes some dramatic interpretation that is suitable for even contemporary arts!
​