We will introduce 'Japanese-style-paintings', and also 'ukiyo-e' which influenced Van Gogh and Renoir. 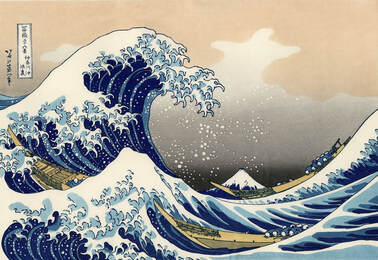 Ukiyo-e by Hokusai
Ukiyo-e is a picture that was established during Edo era (in the 1603-1868). It captured the social lives of everyday people and customs in the Edo era. They include not only the multicolored woodblock print that we think of when it comes to ukiyo-e but also hand-painted pictures. Ukiyo-e is also known for influencing ‘the Impressionists’ and ‘Art Nouveau’ in the Western countries at the end of the 19th century.

The origin of ukiyo-e can be traced back to around the late 17th century. Ukiyo-e featured the manners and customs of the present world rather than the past or the future. Thus, ukiyo-e pleased the common people in Edo era.

As time passed, mass production became available by carving pictures on woodblocks and painting them to print. At the same time, its subjects changed to include landscapes like Mt. Fuji, beautiful famous women and Kabuki actors. These prints were served like present-day fashion magazines, posters and photographs of actors, and they spread among the common people immediately.

It means that pictures before ukiyo-e was invented had been luxuries for the rich painted on folding screens and papered sliding doors or on scrolls. On the other hand, ukiyo-e seemed to play a role as an advertising media that common people always carried with them. Ukiyo-e were widely circulated in Japan and delivered the latest information of the time.

Toshusai Sharaku and Katsushika Hokusai in the Edo era are even now popular ukiyo-e artists not only in Japan but also in other countries!

＊You will get to an art museum with Ukiyo-e by using various vehicles.
The manners and etiquette about transportation in Japan are explained separately. Please refer to
​'Out and About Etiquette in Japan' page. 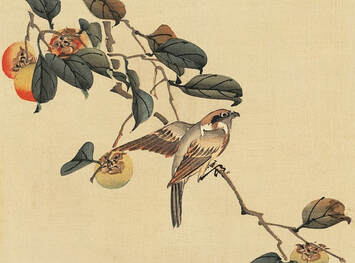 Nihonga: Japanese-style painting
There are Japanese-style paintings called ‘nihonga’. Nihonga paintings can be either monochrome or polychrome. Generally speaking, especially overseas, it seems that ‘nihonga’ includes ink brush paintings (suiboku-ga) and ukiyo-e, a multicolored woodblock print. However, to be precise, ‘nihonga’ is neither ink brush paintings nor ukiyo-e. This doesn’t indicate pictures painted by Japanese artists nor those with a Japanese theme.

The term ‘nihonga’ was coined in the Meiji era (in the 19th century), to distinguish such artwork from Western-style paintings. However, nihonga have been made in accordance with traditional Japanese artistic conventions, techniques and materials, based on traditions over a thousand years old. Nihonga are pictures using materials unique to Japan. For example, they put natural mineral pigments on the canvas with glue to paint pictures. They create very different results from Western pictures painted with oils or acrylic colors.

Nihonga pictures were painted on hanging scrolls, folding screens and papered sliding doors to decorate the rooms of castles, mansions, shrines and temples until the 16th century. In this way, nihonga played a certain role in Japanese daily lives for a long time as well as an ornamental role, as opposed to Western ones. This is the most distinctive characteristic of ‘nihonga’. Most of nihonga are now painted on paper stretched onto wood panels, suitable for framing.

All the existing artwork from the past is so incredible that we cannot believe their age. They make everyone feel overwhelmed with their skillful composition and coloring!