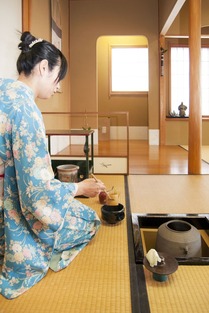 At a Japanese tea ceremony, the host/hostess make green tea for their guests. A tea set, scroll pictures hanging on a wall, flowers, tools to make the green tea are all carefully arranged inside the room and create the perfect atmosphere. The guests enjoy green tea, the atmosphere, the space, and the environment that has been cordially arranged.​ Detailed manners are also required for this reason. People who would like to master the Japanese tea ceremony learn these manners one by one.

In Japan, the this Maccha tea is generally served in Japanese cafés and in some facilities in Japanese landscape gardens.

＊ The manners and etiquette about drinking ‘thin tea’ are explained separately. Please see the ‘Practical Guidance for Everyday Life in Japan’ page.
​​ 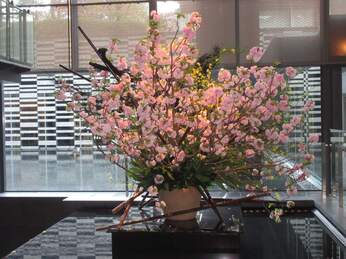 Kado: Japanese Flower Arrangement
​‘Kado’, it is also called ‘Ikebana', is a traditional flower arrangement in Japan. In kado, Japanese people express the beauty of various seasonal flowers through the form and balanced color combination of the work for appreciation.

It is said that the history of kado can be traced back to the introduction of Buddhism in the 6th century, when people started to offer flowers to the deceased. Later in the Muromachi era in the 15th century, a priest in the Rokkakudo Temple in Kyoto attached a religious meaning to flower arrangements, establishing the present style of ‘kado’.

In kado, flowers and plants also represent heaven, earth and human beings, which are to be arranged in a proper balance. Flowers, grasses, trees, and all different kinds of plants are used. This is different from the flower arrangements. Japanese people try to maximize the beauty of flowers, since their beauty and lifetime are finite. This reflects the Japanese unique sense of beauty!

‘Kado’ is popular among many generations as enrichment lessons. Ikebana exhibitions are held in exhibition spaces in department stores, post offices and train stations.
​

​Kodo is counted as one of the three traditional Japanese arts, along with Kado, Japanese flower arrangement, and Sado, Japanese tea ceremony. ‘Kodo’ is the traditional Japanese art that is to burn some fragrant wood in a fixed manner and enjoy its aroma to experience an extraordinary silent world. Japanese people say, ‘to listen’ to the smell instead of saying, ‘to smell’.
​
Kodo has a long history. It is believed that ‘incense’ using aromatic woods was introduced into Japan along with Buddhism from China in the sixth century. In the Nara era in the 8th century, fragrant woods were used for ritual ceremonies.
In the Heian era in the 9th century, aristocrats competed for their own kneaded incense, and tried to tell the names of aromatic woods used and their origin. For example, Japanese ceremonial robes and even fans were perfumed. The tale of Genji, the world’s oldest novel and ‘waka’, Japanese short verse, are essential for ‘Kodo’. People select the scents suitable for the image of stories and enjoy the combination of scents and literature.

Then, kodo was developed as one of the unique Japanese arts in the Muromachi era in the14th century. People established a manner for listening to scents called ‘monko’ and a game of distinguishing the smell of each fragrant wood named ‘kumiko’ at that time.

The high costs and difficulty in obtaining acceptable raw material are the reasons why kodo is currently not as widely practiced or known compared to ‘kado’, Japanese flower arrangement or ‘sado’, Japanese tea ceremony.

We can say this elegant cultural tradition also reflects the unique Japanese lifestyle! 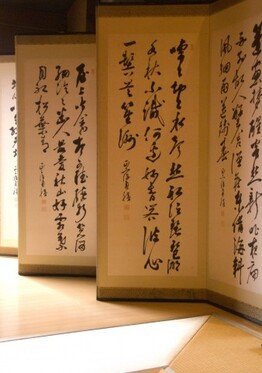 Shodo: Japanese Calligraphy
Japanese calligraphy called ‘Shodo’ remains a traditional part of Japan’s culture.
It is a creative art    to express the beauty of Chinese ‘kanji’ and Japanese ‘kana’ characters with
an ink-dipped brush.

The art of shodo originated in China and it was introduced to Japan in the 6th or 7th century. In
those days, learning shodo was an essential part of the education for noble people. As opposed to
Chinese calligraphy, shodo can express the beauty of Japanese writing by using kana characters.

These days, most Japanese people use pencils or ballpoints to write letters and other documents.
However, students in elementary and middle school learn the basics of shodo in penmanship
classes. Nowadays, although computers and the Internet have widely spread and most people have
fewer occasions to write by hand than ever, the number of people who learn shodo is said to be
increasing.

During the New Year’s holidays, Japanese calligraphy symbolizing their wishes for the new year is even popular all over Japan!